Skip to content
3rd April 20223rd April 2022 | hannah
York Museums Trust is thrilled to announce the donation of the ‘This is England’ ceramic Charger to our collection. The slipware pottery will go on display in the Centre of Ceramic Art (CoCA) at York Art Gallery in April 2022. 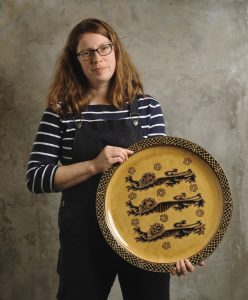 ‘This is England’ was made by potter Hannah McAndrew (pictured) in a personal response to the appalling events surrounding the Euro 2020 final, when three England players, Marcus Rashford, Jadon Sancho and Bukayo Saka, who missed their penalty kicks, were subjected to appalling racial abuse.
In September 2021, Hannah McAndrew offered the opportunity to win the charger in a prize draw, raising money for FareShare, a charity aimed at relieving food poverty and reducing food waste, of which footballer Marcus Rashford is an ambassador. In just 21 days £9000 was raised, equating to approximately 35,000 meals.
The Charger was won by Helen Hepburn, who has generously donated it to CoCA at York Art Gallery.
Potter Hannah McAndrew said; “I’m not a football fan, I’m happy to admit it. I now live in Scotland, but I was taken by the conduct of the English team in this Euro 2020 tournament. They have taken a very clear and united stand against racism both on and off the field. From what I can see, football teams have huge influence with their supporters, so using their privileged position to send out this powerful message of tolerance and inclusion to fans of all ages can only be a good thing.”
The Charger is full of meaning and symbolism, featuring the three lions and ten roses from the England football team badge. The border is divided into thirteen sections representing the nationalities of the players in the England squad and the countries they could have chosen to play for instead of England.
The title of the piece, ‘This is England’ is borrowed from Stormzy’s anthem with Dave and Ian Wright which was played during the Euro 2020 tournament and the lines; “The past can’t hurt us. The future can inspire us. This is England, modern England”.
Lindsay Boswell, CEO at FareShare, said; “We are very grateful to Hannah and thrilled that she chose to support FareShare with the charity prize draw of the ‘This is England’ charger. Hannah’s artistic fundraising efforts have provided the equivalent of more than 35,000 meals to frontline charities and community groups. The charger has played an important part to help tackle food waste and get good food out where it’s needed most. We are therefore very pleased to hear that it will be going on display with York Museums Trust where many others can be inspired by its positive impact.”
It was important for Helen Hepburn, the winner of ‘This is England’ Charger, for the piece to be displayed publicly, so that the meaning stays fresh in people’s minds.
Helen Hepburn, who lives near York, said; “I never, for a moment, thought I would win. It was just a wonderful cause and I loved finding out about Hannah McAndrew’s work because I really like ceramics, especially slipware. I would never have thought my long-term interests in football and slipware would ever combine in any way at all!”
Visitors will be able to see ‘This Is England’ on display in the Centre of Ceramic Art in April 2022.
Dr Helen Walsh, CoCA’s curator of ceramics, said; ”We are thrilled to receive such a generous gift and to have the opportunity to add such an important and powerful ceramic work to our collection at York Art Gallery. Ceramics have long been used to share social messages and this charger is a contemporary example, highlighting the growing ‘Black Lives Matter’ movement. It is also a beautiful work of ceramic art, revealing the creativity and immense skill of the potter Hannah McAndrew.”
Entry to CoCA at York Art Gallery is free. The charger arrives in York on the 6th April and will be on display shortly afterwards in CoCA’s large wall case which we are gradually transforming this year to celebrate women collectors, potters and artists.
What a fantastic piece to start with!
Photos: Shannon Tofts 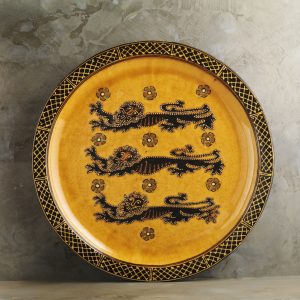 Here we are on the blog page, where we’ll keep you up to date with what’s going on in our lives.

Under normal circumstances we’d be panicking by now, trying to get the last few pots through the kiln, ready to head off to the Earth & Fire show in Nottinghamshire. But of course, these are not normal circumstances. Instead, we’ve been trying to get on top of all the things that we never usually have the time to do. Just at the moment, we’re sorting out the workshop so that it functions properly, which up until now, it never has.

We moved production home to a workshop in the garden of our Galloway home about three years ago, starting off with two portable cabins, which have, step by step, been roofed and enclosed within wooden buildings, as and when time and money allowed.

This year, the lockdown has provided plenty of time and fortunately sales have continued to happen, so we’ve been wielding paintbrushes and employing a local handyman, to tidy up and streamline our operation. 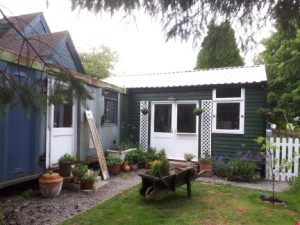 The blue cabin on the left contains our electric kilns and wood machines. It’s to get a coat of green paint in the forthcoming days, once it stops raining. Only the one wall at the front of the workshop has been painted yet, so there’s a lot to do. 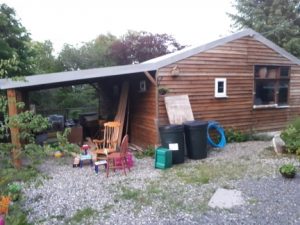 The painting will have to fit in around the next stage, which is to build a large wood fuelled kiln. We intend to start the build in the next week or two. The open-sided kiln shed at the back of the workshop and is ready and waiting.

We need to start getting some pots on the shelves, so as soon as we do, we’ll put some pictures and short videos of them in production, right here.

Here’s a little film narrated by our daughter Pippin, imploring you to subscribe to our channel, so that she can earn jelly babies!

Thank you for checking in on us, please do drop by again soon to see how we’re getting on.

The Stratford Gallery have made this lovely film of the exhibition ‘Tradition – East & West’ laid out in the gallery as if it were opening to the public. It’s wonderful for us to see it like this as we were very disappointed to not be able to attend a public opening. As we said previously we are thrilled to be exhibiting with the highly renown potter from Mashiko, Japan, Tomoo Hamada, quite an honour. The pots that have already been purchased, thank you to all who have done so, we are amazed at the response, should be winging their way across the world right now.